I never thought this would be me. I never pictured a Jewish American Princess selling pills to support her addiction. But there I was.

I started using pills in college. As a type one diabetic and recovering addict, I see now, how it all escalated right before my very eyes. My once innocent fun becomes too fast, too furious for me to even realize what was happening. Parties and frat boys turn into painkillers and larceny.

I was simply trying to feel good. But before I knew what these pills could do, I was already addicted.

I was able to support my habit like I said by drug dealing. My boyfriend, at the time, was hooked too. We thought we were this Bonnie and Clyde duo —or at least that’s how it felt. I have to say, we were a pretty good team.

In short, I really liked it. No. I fucking loved it.

I thought it was actually keeping me alive. Not only was I addicted to the trap boo life because I was just as much obsessed with the process as I was with the pills themselves, but it took on a life of its own. I found myself getting sick after one or two drinks and smoking made me too paranoid. But pills, they were the answer to all of my problems (or so I thought).

The day I did my first opioid was the first day I felt normal.

Initially, we sold a little bit because we were only doing about one a day. Flash forward just one month later, and we’re full-blown addicts. I think we were at 31 pills every 24 hours before things officially ended.

I recall one night in particular.

I remember getting robbed at gunpoint with the drug dealing ex-boyfriend and my junkie best friend. We were sitting in my apartment minding our own damn business. But that didn’t matter. Nothing did.

The sad thing is, we had gotten word of this robbery a few hours earlier. But we weren’t about to let these wannabe thugs take away our lifeline. I mean these pills owned us. And so, we sat in on this lonely summer night —with a knife under the pillow and our stash in the wall. 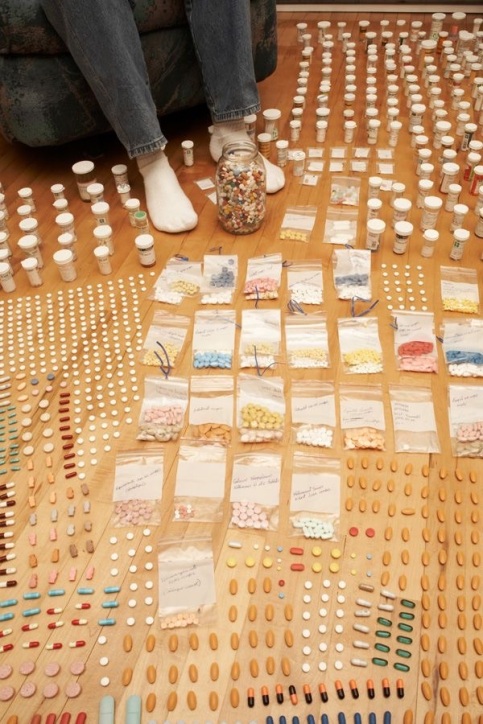 We were ready (or so we thought). Then, we hear a pounding knock on my one bedroom apartment’s cold front door. As I picked myself up from the stained couch parallel to that door, I see the gold knob turn ever so gently.

It felt as if time was at a standstill. I was frozen. I don’t know if it was the 150 milligrams of Roxicodone I snorted a few minutes previously or the three black men now in my line of vision. They had just broken in.

Gregg, the upstairs neighbor, who happened to be throwing a party that same night as a distraction from our break-in, well, he was the reason we were in this situation. You see, he used to get four free pills and a couple bills every time we met up with his connect. We needed him. However, because we were severely addicted, we were severely invested in this drug dealing lifestyle. Therefore, we needed to meet up with that dealer multiple times a day.

Eventually, we became friends. And so, we didn’t need Gregg anymore. No Gregg. No pills. If you knew Gregg, you’d know he was an addict too. So this was personal. He had called a rival gang to perform the b&e (breaking and entering). Gregg’s connect was from up north. We were told to call him New York (NY). I knew if this actually went down, NY would fucking kill Gregg. So, I never thought he’d actually have the guts to do it. We were wrong. But we weren’t giving up without a fight.

The first guy, of course, selected me since I was the only girl. I was an easy target. He made me collect our cell phones as he threw them vigorously across the room. I started to panic as they hit the wall and dropped to the ground. We all did the same.

The other two began ransacking my entire apartment. Ripping through my bathroom, bedroom, my bed; my clothes were tossed as if a tornado attacked my room. My sofa was cut open by the very knife we imagined would protect us, but now it wasn’t even ours. While this was happening, the first guy aims the gun straight at my face.

Ugh. The things I did for these GOD damn pills —what a freaking disgrace. As we fought for our lives, begging them to stop, just to leave already, saying that we have nothing you want, they clearly weren’t going to listen. And we, of course, we’re lying.

The thing was, our drug of choice lay untouched in the crown molding of our white walls. I saw it on an episode of Burn Notice and it was actually about to work. We knew that these idiots would never figure it out. They looked everywhere else for two hours. The ceiling tiles, refrigerator, and my innocent hand-made piggy bank, which for the record was totally wrecked.

They say, “it’s not personal, it’s business” —as if that makes it any better. 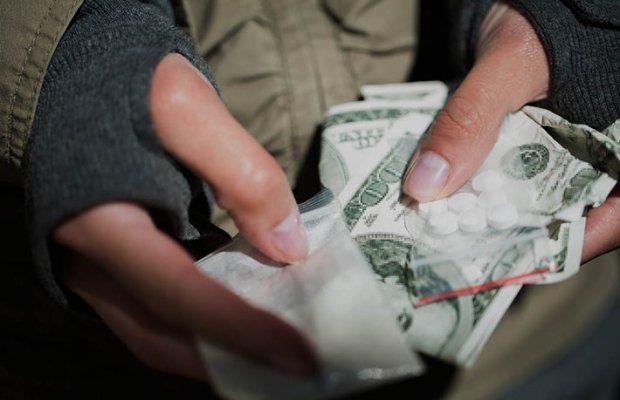 He waves the gun in my face as he pierces it to my left temple. I should be dead. They still couldn’t find anything. They didn’t want to believe us. And so, they made the boys stripe. I thought they were going to make me do the same, but just as one of them was about to say something, we all hear a knock at the door.

Lindsay! She was there to save us. She was coming over to pick up. OMG. We had totally forgotten that we told her to stop by. She was one of our regulars who just happened to grow up with boy number one, the guy waving that gun in my face. I suppose they also got tired of searching.

When we didn’t answer the door, Lindsay knew something wasn’t right. She knocks just a little harder for the next 15 minutes. She knows our word is bond so when we say to come over and we don’t answer, she knows we’re not okay. Well, they make us tell her through the door that we’re busy and to come back tomorrow. But she knew better.

She continued to bang anyway for several more minutes until she realizes these idiots left the door unlocked. As she turns the knob, the second guy runs to shut and lock it. Luckily, Lindsay was faster. Something was going on in there and she was about to find out.

Merely seconds had passed, yet, it seemed like hours. She actually opened the door. She literally saved our lives. I can remember the look on my face as it reflected back at me in the mirror above where I was standing. Holy shit. I was more than ecstatic. They ran out of excuses, almost as fast as they attempted to run out —because they knew Lindsay was friends with their mom. She actually had our backs. Like I said, thank GOD. 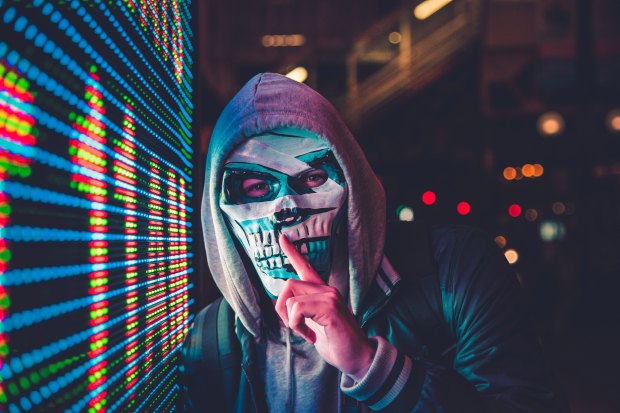 She basically says that she’s known them since they were babies and if she told their mother what they were really doing tonight, she’d kill them before any of us could. She emphasizes that she’s seen their tiny dicks and changed their diapers when they were kids. What in the world are you doing, trying to rob my friends at gunpoint? They got small real fast.

And guess what? They fucking leave. And we’re like what now? It was way too traumatic for my current emotional state. I mean, these pills give you such a high, but when you’re without them —for even a few hours, it’s like you internally turn into this demon. I knew I needed to snort something but I was too afraid to think about anything.

So, we lock the shit out of the front door, make Linds stand by it as we try to clean up. I told everyone we were not taking anything out of the wall until NY was here. So we call him and tell him that we need to talk ASAP but it has to be face-to-face.

Man, I had never been so happy to see him. I think he actually liked us as people because he was legit there in minutes. We recount everything. He was speechless. So we open the crown molding back up, retrieve our cash and pills as we head out the door into NY’s car.

We were not about to sleep here. Truth is, it took me months to go back to that apartment. We slept at my boyfriend’s (at the time), parent’s house who had no idea what we were really up too. I think deep down his mother did but we were pretty smart —so there was never any (visible) proof.

We arrive. I give NY a huge hug and he says he’ll pick us up tomorrow for a refill and offered to take us back to the crime scene to grab my boyfriend’s car. We clearly weren’t in a proper state of mind to drive. Hence, the ride. Anyway, we sneak inside quietly and run to his room. I brought my pink fleece blanket because it reminded me of home. We needed to get high. I grab our personal stash, a few dollar bills that would later be folded to snort those pills up our nose. 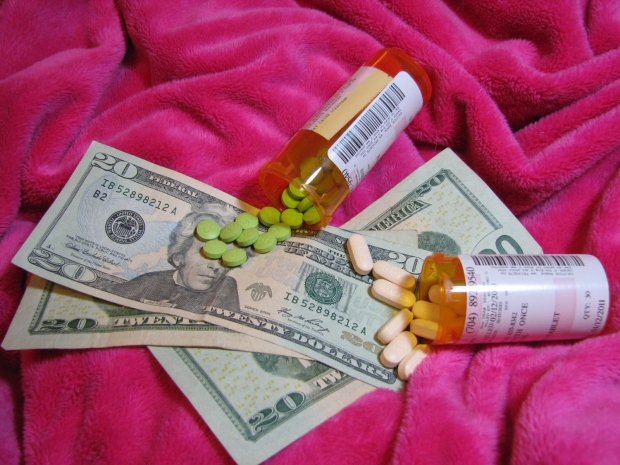 I remember feeling relief. We didn’t back down and all we lost was a stupid knife. We actually survived. We snort a few more and eventually pass out. Little did we know, NY had made his way back to our apartment complex. He figured the three guys were chilling at Gregg’s. He was right. He went over to teach those boys a lesson (Gregg included). Needless to say, no one messed with us again.

The funny thing was, we were back at it the next day as if nothing ever happened. Yeah, I didn’t go back to my apartment for a while, but we had our new spot. If there’s one thing I’ve learned it’s that if an addict wants to get high, he or she will.

Unfortunately, this particular story doesn’t have a happy ending —yet. It took a few more years filled with more loss, pain, and a shit ton of suffering. But, at the end of the day, I’m here now, writing this to you clean and sober. So yeah, there’s that. Because sometimes the worst thing that happens to you, the thing you think you can’t survive, well, it’s the thing that makes you better than you ever used to be.

Until next time, guys.

*names have been changed to protect the privacy of the individuals involved.

12 thoughts on “Drug Dealing & Pill Popping: The Time I Got Held Up At Gunpoint Inside My Own Apartment”